Snow in South Africa? Yes! You read that right, we do get snow down here at the tip of the African continent – and a fair dose of it too. I recently took my camera and headed out into the Franschhoek Mountains to capture the experience.

I am a full-time professional mountain guide working across the Western Cape.

Contact me to lead you on a winter hike in the Franschhoek Mountains to find snow.

Email justinhawthorneblog@gmail.com or look out for a scheduled group hike on Facebook.

Winter in the Western Cape and neighbouring provinces of the Northern and Eastern Cape, along with the Free State, KwaZulu-Natal and Gauteng all can receive snow during the winter months when big cold fronts sweep across South Africa. The southwestern Cape is a winter rainfall region, and as such the season is cold and wet, with snow falling at higher elevations on a number of occasions between June and August. The beautiful snow-capped peaks of the Boland and beyond to the north are a magnificent sight when looking out across the Cape Flats and False Bay from the Cape Peninsula – the icy air felt too! Driving out to the country towns such as Tulbagh, Worcester or Villiersdorp allows for beautiful snowy vistas, and in towns such as Ceres you’ll drive right to the snow itself – think Klondyke Cherry Farm, or Matroosberg Private Nature Reserve. Hiking is an altogether different story, and I describe my latest experience on foot here…

Trekking through the snow in the Franschhoek Mountains a day after snow fell.

I set off for the Mont Rochelle Nature Reserve which provides an excellent base from which to access snow on the mountain peaks. It was already bustling with snow hunters – geared up like us as if  we were set for a long winter in the Great White North of Canada! Well, we should have been as the temperature was 5º Celsius and would drop more as we pushed many hundred metres further up the mountain slopes, that coupled with cloud cover, potential rain and the wind chill factor. I’d prepaid our permit fees so it was just the formality of signing in before we were off, trekking up the gorgeous Protea-clad slopes where endemic Cape Sugarbirds braved the chill for their daily nectar fix.

The scene was surreal, morning sunshine piercing through the clouds and hitting the vibrant mountain slopes above which snow was visible. The excitement grew as we saw the first indications of snow in among the vegetation along the footpath and before long the slopes were smothered in white powder. Conditions deteriorated as we climbed with visibility down to barely anything at times. We crossed paths with a familiar face – pausing temporarily to exchange pleasantries while knowing that standing still wasn’t doing the body any favours. The path was barely walked higher up, and in places one could see footprints wandering off track through the near knee-deep snow. It is in these conditions that an unfamiliar hiker to the area may become disorientated and together with weather conditions it could lead to significant problems.

Majestic scenes greeted us as we set off 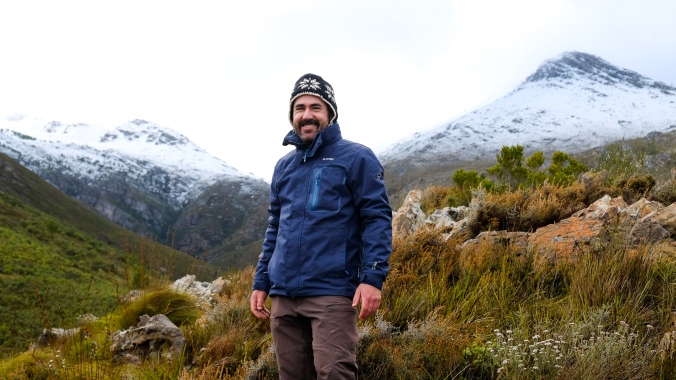 Grand scenes along the trail.

We tested our finger dexterity when enjoying multiple steaming cups of Rooibos whilst shoveling down eggs on ciabatta for a memorable lunch in the snow! Later that afternoon drizzle began falling as we descended from 1500+ metres elevation, dropping below the cloud to get a glimpse once more of Theewaterskloof Dam and the golden sun-kissed slopes of the Groenlandberg – a beautiful scene fitting to cap off an epic day out.

The reserve offers a host of hiking options such as the out-and-back Uitkyk which is very popular, DuToitskop which is a steep climb and then Perdekop which is a full day hike that is not to be taken lightly at he best of times, let alone just after a heavy snowfall. 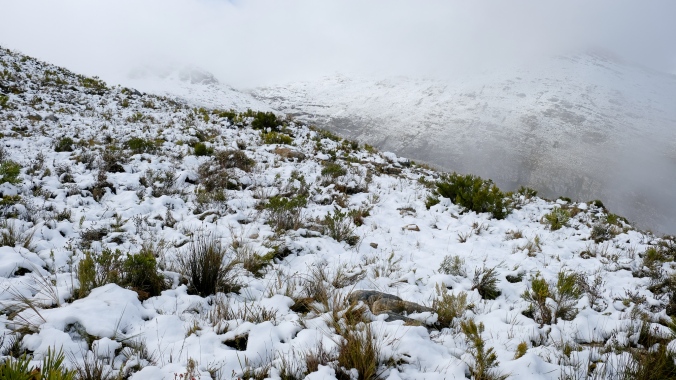 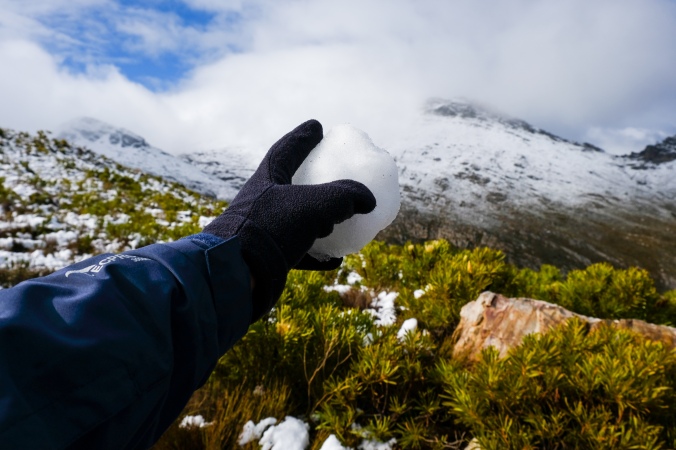 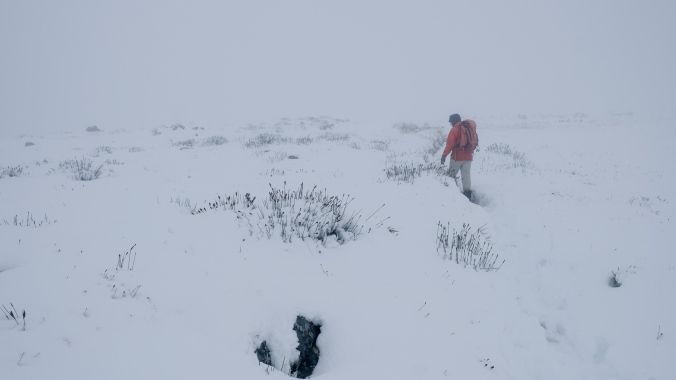 The gorgeous town of Franschhoek lies within the valley of the same name and the nature reserve itself is a 1hr15min drive from Cape Town city centre. It forms part of the Western Cape’s iconic winelands region and neighbours both Stellenbosch and Paarl. Just over the mountains to the east lies Villiersdorp and Wellington together with Worcester is a drive further to the north.

South Africa, the most magical outdoor destination, is open to visitors! Get in touch to start planning your hike with me.

“RULES OF THE RESERVE DURING LOCKDOWN

–Hikers must wear masks when entering the reserve and talking to staff members.

–The temperatures of all hikers will be taken on entering MRNR and those found to have an elevated temperature won’t be allowed to enter the reserve.

–Lockdown social distancing rules must be adhered to.

–MRNR will provide screening and sanitising for all hikers entering the reserve.

–The Advisory Board of the MRNR and the Stellenbosch Municipality won’t be held liable if a person is diagnosed with COVID-19 at a later stage.

–All hikers will exit the reserve daily by 6pm.

6 thoughts on “Chasing Snow on foot in South Africa”