Fueled by dense invasive alien vegetation and a southwesterly wind, the wildfire raced up the dry mountain slopes of the central Twelve Apostles. It moved onto Spring Buttress and adjacent ravines, crossing the Camp’s Bay Pipe Track as it then licked up the fynbos vegetation in its tracks. Two SANDF helicopters bombed the fire between 16:30 – 18:30, collecting water from Woodhead Dam on the Back Table.

By nightfall (19:20), flames could be seen in the vicinity of Slangolie Nek where dense cloud hung over the mountain from an elevation of around 700 metres upwards. The fire as such threatened to creep into Orange Kloof. Added concern was that the MCSA Hut, CPMC Hut or People’s Cabin among others could suffer damage with any westerly or southerly wind blowing. What is working in the firefighting effort is the fact that light rain fell overnight.

I happened to be guiding a hike on the Twelve Apostles section of the Table Mountain National Park when we realised there was a fire at approximately 14:00. We suddenly noticed an orange to brown hue in the air, no smell of smoke however. After checking with authorities and summing up conditions we proceeded safely as planned, able to avoid the danger of the raging fire. Favorably for us the fire ignited north of where we were hiking, and the wind direction was from the southwest – essentially meaning it was being driven up-slope, away from us.

The fire occurred prior to official fire season in the Cape, and as such the Working on Fire helicopters were not at the Newlands Fire Base, hence the SANDF presence. 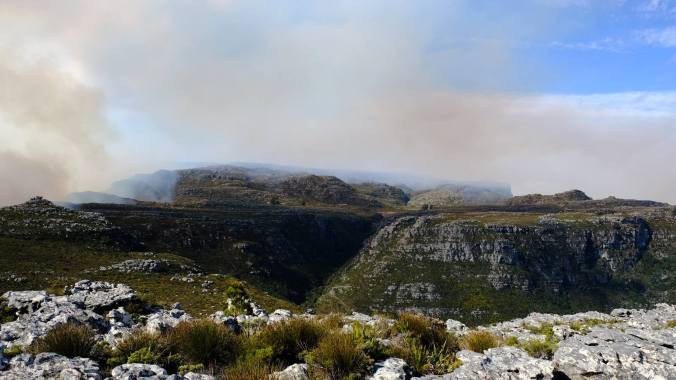 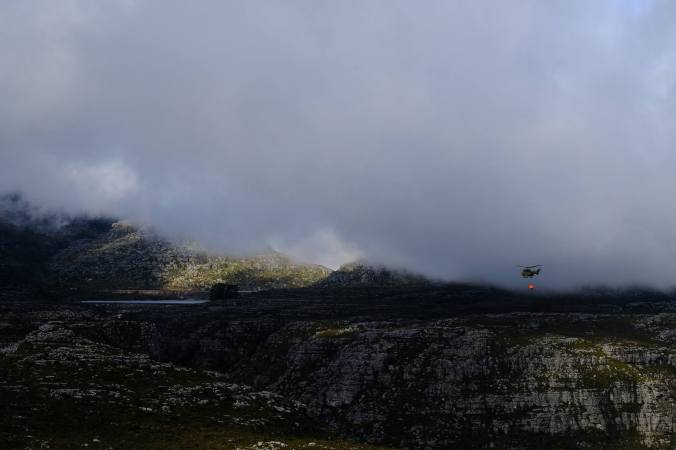