Stepping out onto the wooden deck at dawn, wrapped up snugly in a blanket, the smell of a gentle ocean breeze filled the air. It was cold. Icy cold! However the sky was clear and a it looked like it had the ingredients for a beautiful late-winters day along the Cape West Coast. Waiting for the coffee to brew in the French press a Cape robin-chat called in the thicket. There was an eerie silence as fog hung over the pans, bird hides jutting out and then disappearing only to later be visible once more and reflecting in the mirror like surface of the water. It was beautiful. A few minutes later and I had my hands curled around the mug and sat absorbing the new day roll in. It was our second morning at Rocherpan Nature Reserve and sadly our rejuvenating weekend was drawing to a close…

We picked Rocherpan for all the good traits the West Coast brings to the table for relaxation: flat landscapes with endless vistas, long stretches of white sand beach, silence, starry skies, bird watching and nature trails to properly soak up the wild. The nature reserve is primarily focused around the conservation of a seasonal pan which attracts bird life in abundance and is home to important flora. Much of the Cape West Coast is agricultural lands today, and having protected spaces such as Rocherpan cannot be overvalued. 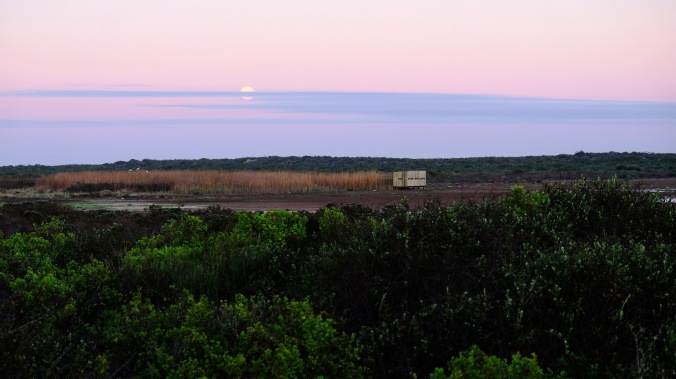 Waking up to bright sunshine we laced up our running shoes and hit the coastal trail. The roughly one hour long 8 km route takes you over the dunes and along the pristine white sand beach where the view north is endless. Back over the sand dunes the trail gets interesting and we passed through beautiful patches of wildflowers – blooming after some good winter rains. Babiana, Katbossie, Microloma, Zaluzianskya and a variety of Daisies were among the many flowers adding colour to the landscape along the trail. Two ostriches ran off across the dry pan, and antelope tracks in the sandy soil indicated their presence in the area. 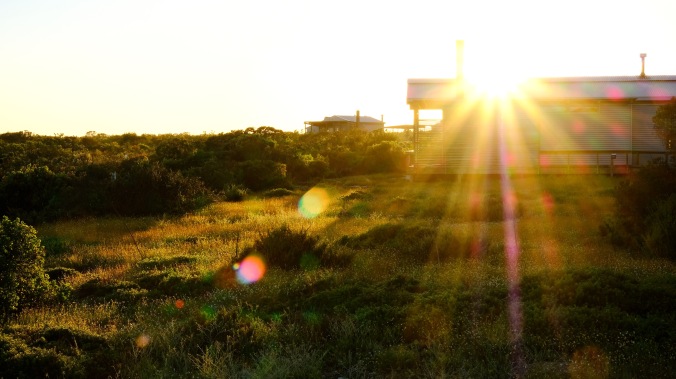 Back at the eco-cabin is was a day spent relaxing and soaking up the warm winter sun. Accompanied by a glass of crisp Sauvignon Blanc and occasionally picking up the binoculars to observe inquisitive birds such as Cape weavers and Cape sparrows ensured the day was being spent right.

The rest camp is situated adjacent to the reserve office and staff housing whereby minimising environmental disturbance. Although at first glance it looks as if the cabins are on top of each other you definitely get privacy and barely notice your neighbours. Rainwater is captured via the roof and used throughout the cabin (note: either boil it, or bring your own drinking water) and the environmentally friendly toilet is brilliant – a compostable long drop. 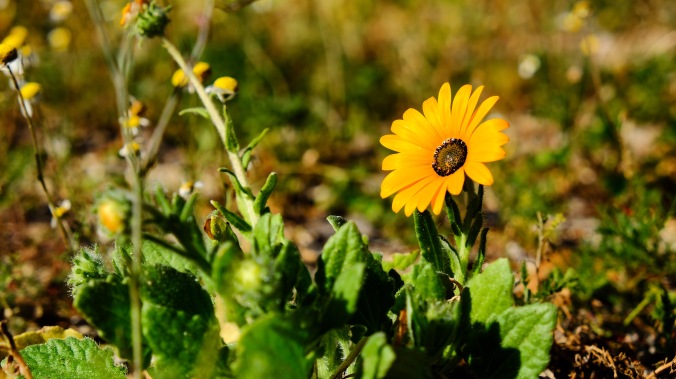 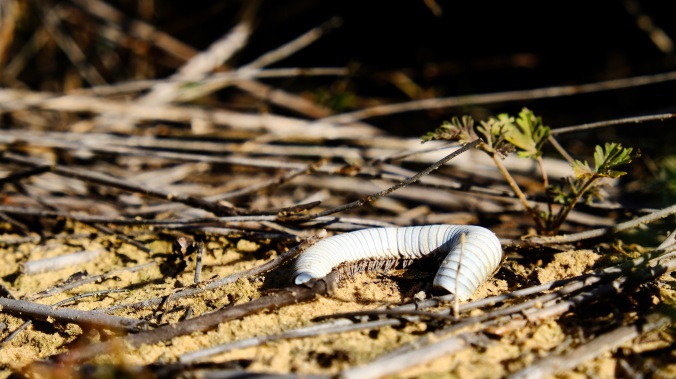 By mid afternoon we ventured over to the bird hides to add more ticks to the 20 odd species we’d seen around the cabin and on the run. The southern pan had water, but the bulk was dry due to a few years of lower than average rainfall. This of course resulted in a low bird count and many iconic species such as Flamingos and Pelicans were absent. By this time there was an icy wind blowing and we moved between the hides trying to find the most protected spot to sit quietly, watching. Black-headed heron, Cape shoveler, Three-banded plover, Black-winged Stilt and Blacksmith Lapwings were among the handful of species seen from the hides. Cape Spurfowls called often and darted across the jeep track whilst moving between the hides, beach and cabins. 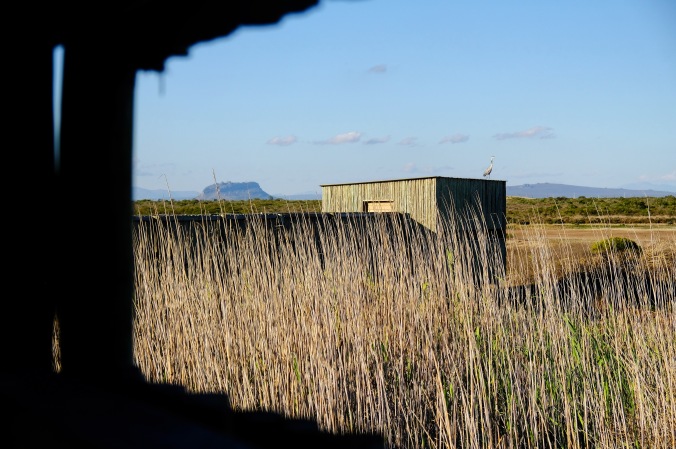 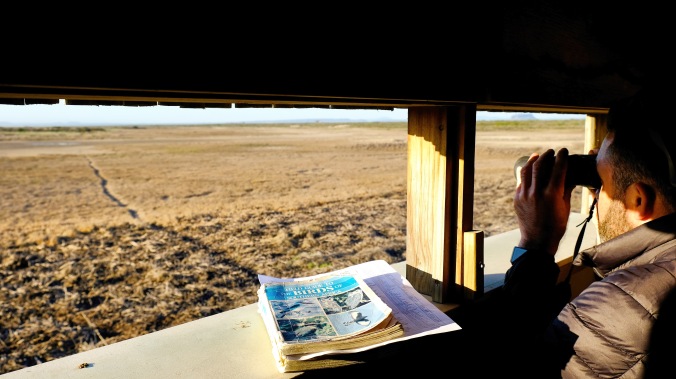 The short walk from the pan to the beach for sunset was incredibly rewarding. As the sun dipped towards the horizon under a clear sky, bands of color intensified. A woman fished in the shallows and large ships waited in the distance offshore from St Helena Bay. The last bit of golden light lit up the sandveld and warmed our skin as the ocean breeze chased us back to the comfort of our accommodation. 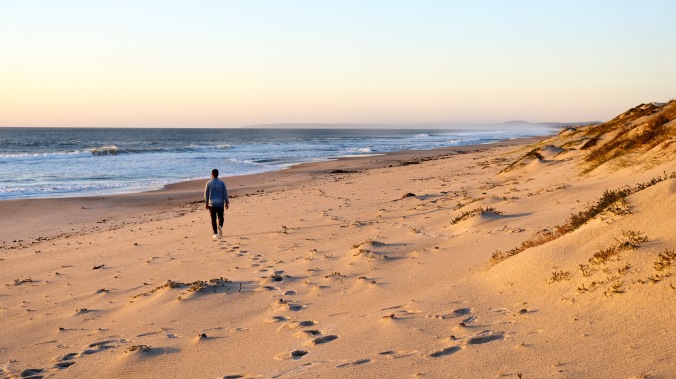 Rocherpan Nature Reserve is located within the Cape Floral Kingdom – a UNESCO World Heritage Site where the Fynbos biome holds incredible diversity. Spend time admiring the vulnerable sandveld vegetation where you should see something in flower at any time of the year. Whale sightings along the coast from late winter through spring further emphasize Rocherpan as a must-visit site!

How to get there:

From Cape Town follow the R27 through Velddrif  and shortly after passing Dwarskersbos you’ll turn left into the second gate at Rocherpan Nature Reserve (170km / 2hours).

Self-catering cottages at Rocherpan Nature Reserve go for R1200 (4 person cottage) off- peak, and R850 (2 person cottage) off-peak. Remember, last chance, the 40% off winter special runs until 31 August. If you don’t get there this winter or spring, start planning for next year! Accommodation and permit bookings Tel: +27 (0)21 483 0190 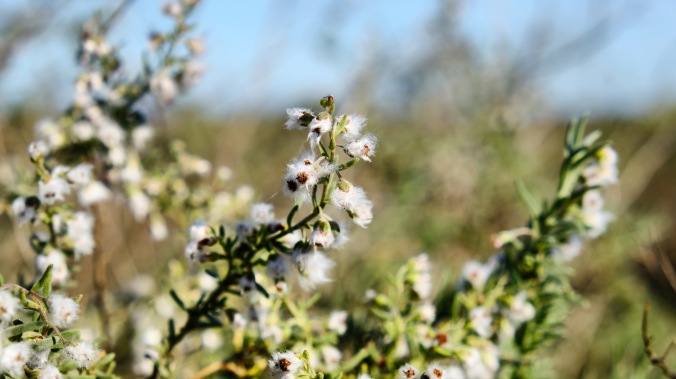 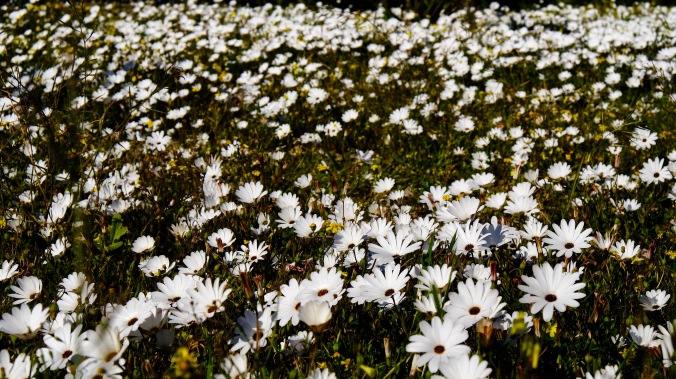 One thought on “A winter weekend at Rocherpan Nature Reserve”