In late winter last year I went up in the air with NAC Helicopters on their Three Bays Tour. The early morning rain had dissipated, scattered wisps of cloud were lingering on Table Mountain & Devil’s Peak, and the ocean was all frothy after being kicked up in the storm.

It was my second heli flip, the first coming 10 years ago when I spent an hour soaking up the incredible views of the Grand Canyon in the USA.  That memorable flight in June 2007 was significant, of course, but nothing quite compares to seeing your home, playground and workplace from a fresh perspective.

Taking off from the heli pad adjacent to the V&A Waterfront, the scene was quickly set. Table Mountain (Hoerikwaggo) standing tall, the backdrop to the vibrant Mother City. Looking down the spine of Signal Hill, from the Lion’s Rump to its Head, and then moving slowly along the Atlantic Seaboard where the Lion’s profile is ever more significant.

Cape Town on a winters morning!

North Paw & South Paw protect the granite strewn beaches of Clifton, completing the major topographical features of the iconic mountain. What really stood out was seeing the exposed granite rock on the Northwestern slopes from the sky – a perspective which really shows their extent. 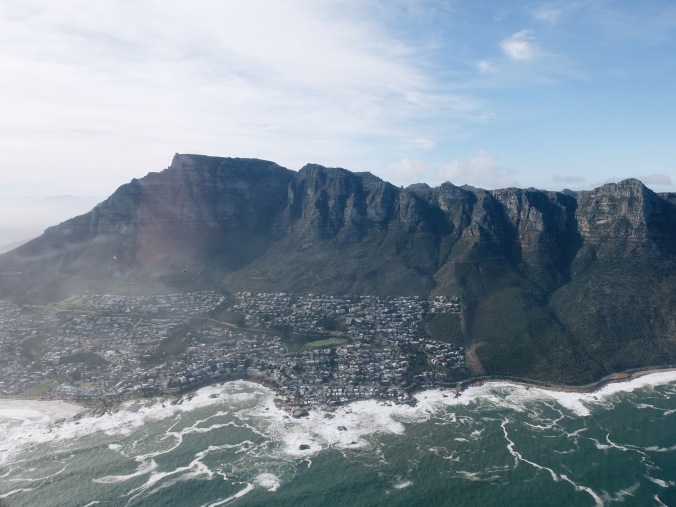 The Western slopes of Table Mountain

Flying past Camp’s Bay and along the Twelve Apostles is when the flight took an even more significant turn as I got to see this aspect of Table Mountain for the very first time from elevation. The Northern and Eastern slopes are a typical scene when departing or arriving back at Cape Town International Airport, but the Twelve Apostles range on the Western aspect was something of a mystery. 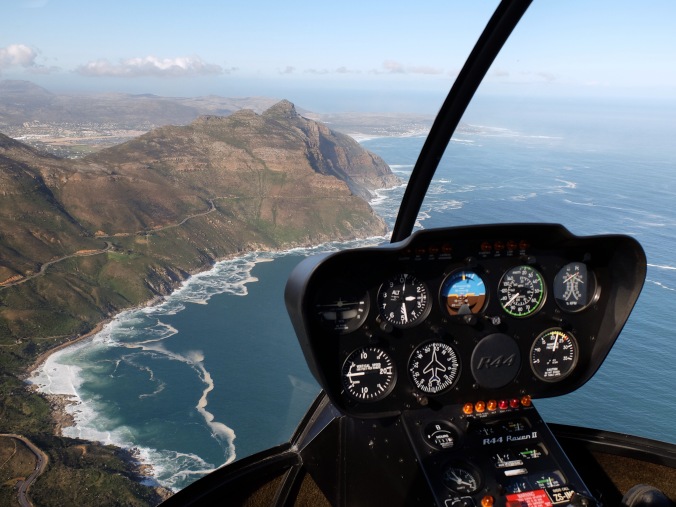 As we flew over Llandudno, my eyes were more closely fixed on the paths on Table Mountain’s Southern extremity near Judas Peak. I was seeing the very trails I hike multiple times per week, and from this vantage, the detail was stimulating to the mind! Fresh perspectives do that!

We swooped over Suikerbossie and over Hout Bay, with the ever impressive Chapman’s Peak up ahead. The mountain slopes were covered in 18-month-old vegetation after the March 2015 fires: recovery in a good state.

Flying over Chapman’s Nek we then beelined for Fish Hoek Beach, which saw us cruise over the Silvermine Valley where I grew up (more on this later).  A truly significant moment.

The coastal stretch of Clovelly, Kalk Bay, St James & Muizenberg is always a pleasure to drive and walk, and from the air, it reinforced just how pretty the area is!

My eyes were darting about between Elephants Eye Cave, the recently felled Tokai Plantation, the last stand of pines at Lower Tokai Park, and the Constantia Valley vineyards. While picking out the natural elements, I snapped the photo of Pollsmoor Prison – managing to get the entire complex in the shot.

A calm Newlands Reservoir reflecting the Pines below Devil’s Peak

Kirstenbosch National Botanical Garden came into view, flowing onto Newlands Forest where a calm Newlands Reservoir was reflecting the tall pines. Devil’s Peak is one of my favourite areas to hike: it offers such high value if you enjoy a tough adventurous day on the mountain. The finest ascent is via Mowbray Ridge and the Knife Edge, followed by scrambling over Minor Peak and then up the Direct Path to the summit – a brilliant route with stunning views and to top it off there’s hardly ever anyone else on the trail!

As one soars above Rhodes Memorial, Devil’s Peak will stand proudly between the Table Mountain plateau and Lion’s Head – the three peaks lined up uniquely. In my opinion, it is one of the most impressive scenes on this heli flip.

Approaching the City of Cape Town

We swooped in over the harbour, aiming for the helipads which are positioned near the Table Bay Hotel along East Pier Road. And as with all good things, it came to an end!

NAC Helicopters offer a variety of Heli flips around Cape Town, taking off from the V&A Waterfront. To book a flight go to www.nachelicopters.co.za – enjoy!